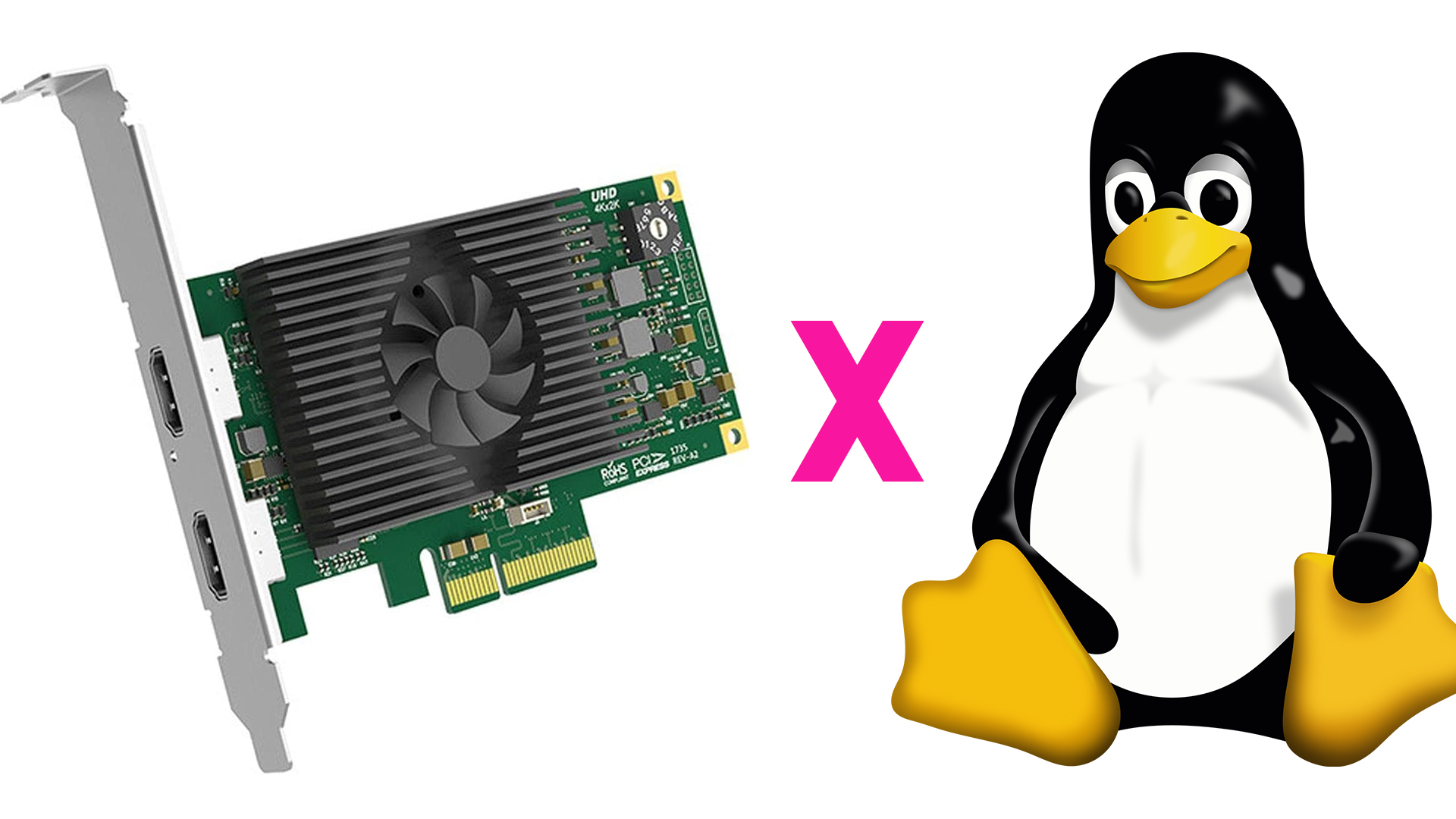 Today a community member in our Discord server brought up an article recommending capture cards for Linux and… the recommendations weren’t great. The only name-brand card recommended doesn’t work on Linux at all (and has a very bad reputation for being miserable on Mac OS even) and the rest were just knock-off “can’t links” (as we call them). As the leading authority on capture card reviews, I thought it was worth finally compiling my own list of Linux-friendly capture cards!

These are best used with OBS Studio (which should be available in all distros’ app stores, Flatpak, AUR, etc. or can be installed manually) or guvcview.

“What is a capture card?” A capture card is a device that connects to your computer (usually USB or PCIe) which can process, transform, and capture raw HDMI (or analog if older) video feeds into a format that’s usable on your computer for purposes of viewing, recording, or live streaming.

[This post features Amazon affiliate links where I receive a small commission from your purchase at no additional cost to you.]

These are in no particular order, this isn’t a ranked list. This is just 10 great options to choose from. Video reviews detail the cards thoroughly.

The AVerMedia Live Streamer CAP 4K is a capture card in the “cam link” category. This is designed to be used to capture your camera for video conferencing or streaming. It performs great at this task, but also supports higher-spec gaming formats to input such as 1440p144, 4K60 and HDR. HDR is tonemapped to SDR automatically.

Since this capture card only has a HDMI input, but no output port for passthrough you will need a HDMI splitter to use with a game console or PC input (if not display cloning) so you can actually see your gameplay on your TV.

This capture card also works great with retro formats such as 480p, the 1080p and 1200p modes from the RetroTINK 5X Pro, as well as all 2x through 5x modes of the OSSC!

In my testing (specifically Garuda Linux here) the card works flawlessly with Linux and OBS Studio, receiving all video formats and audio. Plug and play, no messing around needed.

The EZCap GameLink RAW / EZCap321 is a capture card from a name you may not have heard from in a long time, unless you spend a lot of time on AliExpress. It uses the older HDMI 1.4b spec, so it doesn’t support the latest specs – but seems to perform quite well for what it is.

This card works great out of box in Linux, even directly exposing 120FPS capture at 1080p! This does not happen in Windows, you just have to set it to “Highest FPS”.

This capture card works solidly with the OSSC and other retro devices, though RetroTINK 5X support might seem lacking above 1080p.

The ASUS TUF CU4K30 was a surprising release from a company that doesn’t usually make/sell capture cards. It supports high-end specs, is plug-and play across Windows, Mac & Linux, and works surprisingly well.

This capture card works with the RetroTINK 5X up to 1200p and the OSSC works fine. 480p also works great.

This capture card also has a headset 3.5mm audio jack and a 3.5mm controller passthrough port to capture party chat or game sound routed through controllers, as well as microphone from a gaming headset.

The TUF CU4K30 works great in Linux in my testing (Ubuntu, specifically here) but ASUS does not have a version of the firmware updater nor audio controller/mixer software for Linux, so this will need to be handled in Windows and then moved to your Linux instance.

EVGA is another company that has shown up and surprised me recently with some pretty rock-solid capture cards. Their XR1 Lite is no exception. The price fluctuates quite a bit, but when it’s available for $60 (or around there) it’s by far my TOP recommendation for sub-$100 capture cards.

It’s simple but it’s super cheap and does the job well. The XR1 Lite also works great on Linux!

While this tends to run a little more expensive than some of my higher-recommended capture cards these days, the ClonerAlliance Flint 4KP Plus definitely delivers if you’re looking for an alternative to the usual brands you hear about.

This capture card also works great on Linux, albeit again without the audio mixing software.

OSSC works in all modes 2x-5x.

Please pay attention to which capture card from Elgato you look at! Elgato has the “HD60”, “HD60 S” and “HD60 S+” and only the “HD60 S+” works with Linux. It’s a UVC card that works with Windows/Mac/Linux, but the original HD60 S does NOT work with Linux (and also does not cooperate with Mac), despite what other articles may tell you.

The Elgato HD60 S+ was quite the nice, impressive release for the time. The first game capture-oriented capture card from Elgato to be UVC, supports 4K passthrough for 7th gen consoles, and fixed a lot of issues their previous cards had.

This device connects with USB 3.0 5gbps with type-c.

The HD60 S+ is quite high quality, relatively low latency and one of those “gets out of your way” capture cards – if you don’t need 1440p or high refresh rates.

Linux support is great, right out of the box.

If you haven’t heard of Magewell, they’re an expensive brand. Magewell puts a ton of time into their R&D and making the most flexible and capable capture devices on the market. They can accept just about any resolution within their spec (including 240p sometimes) and have on-board hardware for scaling bidirectionally, converting framerates and color spaces, deinterlacing, and doing all sorts of other magic with your video signal before it even hits your PC. (Scaling before ingest saves on bandwidth and processing power.) But they’re pricey.

The Magewell USB Capture HDMI 4K Plus features HDMI 2.0 passthrough for full 4K 60hz passthrough, and a mic in and headphone 3.5mm jack. You can access the HDMI audio and mic audio as separate devices in OBS, and the headphone jack can even mix in your PC’s system sound to hear in your headphones as well.

Weirdly, the card uses USB type A for its 3.0 5gbps connectivity.

This is a rare USB capture card that can actually capture in 4:4:4 RGB at 1080p60. The 1440p specs get weird because, unlike most capture cards, the card’s driver itself doesn’t really place a limitation on what formats you can try to capture – it will just try to capture every frame you request until it runs out of bandwidth.

This device works perfectly with the OSSC up to 5X.

This card has a fan, though you never hear it – you might just have to dust off the intake sometimes.

Linux support is perfect for most Magewell devices and this is no exception – however Magewell’s “Capture Express” software as well as the “USB Capture” software to manage EDIDs for this device only has a Windows build available.

Secondly from Magewell, we have the Pro Capture HDMI 4K Plus LT. What a name.

This is basically the same as the previous USB capture card, but runs with PCIe x4 connectivity for higher bandwidth captures.

This allows for native 4K60 captures, along with some of the higher refresh rate formats. Native RGB 4:4:4 capture is really nice.

This card also plays really nicely with retro scalers like the OSSC up to 5X.

This capture card can technically support HDR as well – though there’s not really any software support for this workflow – but Magewell provides their SDKs for you to develop your own! (Contact me if you do.)

Again, this capture card works wonderfully on Linux, but with the primary support apps not being available. (They’re not needed, just handy to tweak it.)

This capture card has a fan. In super silent environments you can hear it if you get close, but I never found it to be an issue. The original non-LT version had a much louder fan.

The Live Gamer Ultra works well on Linux – I ran into some issues with certain formats before, but this seems to be much better now than in my review in 2018.

AVerMedia’s software, including the firmware updater tool, is primarily for Windows unfortunately.

Epiphan is another company like Magewell which costs more than the Elgatos of the world, but primarily sells B2B or for industry applications (some are on the International Space Station!). But they can be pretty flexible!

The AV.io HD is one of the first capture cards I ever reviewed – all the way back in 2015! Simpler times.

This device actually has a DVI port on it instead of HDMI, but accepts VGA, DVI and HDMI (with audio) signals and connects via USB 3.0 5gbps.

This one has no passthrough, so you’ll need a splitter if using for anything other than a camera.

This device works perfectly with Linux! Plug and play.

AV.io HD is another device that has onboard scalers, deinterlacers, etc. to do a lot of the signal conversion grunt work before the video hits your PC, saving on bandwidth. It’s an older card, but it does the job.

The Epiphan AV.io 4K is an upgrade on this concept. HDMI input this time, USB 3.0 5gbps output. No passthrough. This one has a fan, but it’s silent.

Again, this is a device with built-in hardware for scaling, deinterlacing etc.

AV.io 4K works perfectly with Linux – but with no passthrough you’ll still need a HDMI splitter for gaming.

Epiphan is the only company listed here that actually offers firmware updating tools and config tools for Linux. Huzzah for Epiphan!

The Elgato Cam Link was originally released in 2017 and has since been in-place replaced with the “Cam Link 4K” (an upgraded model) for camera captures. It can also work with gameplay if using a HDMI splitter. It’s a UVC device which supports Linux, as well.

On Windows I’ve had long-running issues with both Cam Link models having a black screen issue requiring you to USB port-hop to get it working frequently, and I recommend it a lot less these days compared to competing options. But it should be a little more reliable on Linux.

The “Logitech 4K Pro Webcam” is NOT a new webcam